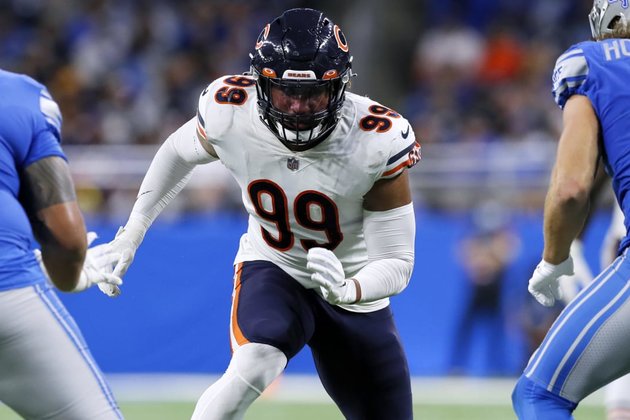 ESPN has selected defensive end Trevis Gipson as the Bears' most underrated player.

Gipson was also chosen as the Bears' most improved player by ChicagoBears.com.

Gipson was a two-year starting defensive end at Tulsa, where he earned first-team All-American Athletic Conference honors as a senior in 2019 after setting career highs with 49 tackles, eight sacks and 15 tackles-for-loss. As a junior, he registered 46 tackles, four sacks and nine tackles-for-loss.

Converted to outside linebacker with the Bears, Gipson's transition as a rookie initially wasn't easy, primarily because all offseason workouts and preseason games were cancelled due to COVID-19. But after a full year and offseason under his belt, the 6-4, 263-pounder was able to take advantage of expanded playing time in 2021 after perennial Pro Bowler Khalil Mack was shut down for the season in late October due to a foot injury that required surgery.

Here's what ESPN wrote in naming Gipson the Bears' most underrated player:

"Gipson emerged as a strong No. 3 and spot starter for the Bears last season, racking up seven sacks and 15 hurries in just under 500 snaps. Though a bit raw in his approach, Gipson has good length, functional strength and stunning flashes of bend around the corner. If Gipson can use this year's opportunity as a starter to take another step forward, the Bears may have a real difference maker on their hands."